This summer, CHI invited its USA Work & Travel participants to take part in a contest to help show off their program spirit. Participants were asked to submit an essay, video or photo slideshow that best demonstrated their personal â€˜American Experience’.  In their own words and images, here is what this year’s CHI USA Work & Travel alumni have experienced during their summer in America.

School is over, I passed all exams. I’m ready for summer adventures in the United States. I didn’t have to wait long because my adventures started as soon as I left Ukraine. My flight was delayed and therefore I got a free hotel and had an opportunity to spend a day in New York City. So, I decided not to waste my time and went to explore this amazing city. Of course I went to Central Park first, where I fed some ducks, saw a little turtle, and a raccoon family. I spent almost all my day there. I had a nice and relaxing time. Afterwards I went shopping at Times Square and like always there was so much going on around me. I got a picture with the naked cowboy saw some military equipment and Goog Gun – weapons. Last summer I visited NY, so I wasn’t in a hurry trying to see all the sights of the city in a day. I just enjoyed my time walking along the streets, admiring buildings, and watched people and their way of life.

Finally, I got to Denver where my friend Logan met me there with a couple surprises. As he knew that I love fashion, he got tickets for Yves Saint Laurent (YSL) Fashion Show in Denver Art Museum. It was astonishing and only showed in three cities on Earth. After that we went to a Butterfly Pavilion. I was so excited. Hundreds of beautiful colorful butterflies were flying around and landing on us. We even held Rosie a little furry tarantula spider. It was the craziest thing I’ve done in my life because I’m so afraid of all these creepy crawly creatures. When we went downtown in the evening, an atmosphere of entertainment and overall high spirits reigned there. Some creative people were playing pianos surrounded by an enthusiastic audience. Some other bystanders were entertained by tricky magicians. Carriages with beautiful white horses reminded me of ancient times. I like this city for its individual style and nice friendly people.

So, our plan was to go to Washington D.C. and then to Myrtle Beach, South Carolina where I was going to work at Build-a-Bear Workshop. So, we went on a trip across America. We visited many interesting places on the way there. We saw the World’s only Corn Palace in Mitchell, South Dakota. To tell you the truth it wasn’t made of corn as we expected but just decorated by corn. Still it was very extraordinary. We crossed the longest river in the United States the Missouri, it was huge and wavy resembling a lake. Our next stop was St. Louis, Missouri. There we went to the Gateway Arch which is the tallest man-made monument in the United States. We viewed the beautiful scenery from the top of the Arch. After this scenic city we drove to the capital of the United States Washington D.C. It looked like any other city in the USA, but there was some original charm and national spirit among us. I liked it so much. We spent a couple days there and visited the Lincoln Memorial, Capitol Building, White House, Washington Monument, World War II Memorial, and Vietnam Memorial. We saw pandas at the National Zoo, and enjoyed the famous art masterpieces of Vincent van Gogh, Pablo Picasso, Leonardo da Vinci, Claude Monet and other’s talented artists at the Smithsonian Museums. This city made an unforgettable impression on me.

After a weeklong trip we finally arrived in Myrtle Beach. The first thing we did was we went to the ocean. It was at night but the lights from the Ferris Wheel lit up the beach and water. It was very beautiful. We found a jelly fish and some cool sea shells.

So, I thought that my adventures were over. I was just going to work all summer long. But my job was very easy and I had time to enjoy the ocean. Build-a-Bear was a very fun job, I met many great kids and it was so cute to see their happy faces as they watched their bears come to life. Thank you CHI for such an amazing job, because I learned there how to find the key to everybody’s heart. Not only children were happy but their parents were moved to tears after the heart ceremony too. I believe I did my job well. When I had free time I really loved to spend it at the beach looking for some cool sea shells, corals and shark teeth. I never thought in my life that shark teeth can be black colored. As one expert from a gift shop said to us that means that they are millions of years old. On one day off I was swimming in the ocean and suddenly all the lifeguards started whistling and told everybody to leave the water immediately. I thought that it was a shark warning, but no it was a huge whale passing by the beach from the distance of the pier. It was very impressive.

The next day I went on a short trip to Charleston, South Carolina with my friends Logan and Luba. I want to say that Charleston with its old historic buildings and colonial styled churches, scenic streets, vivid yards and gardens leaves nobody detached. I learned that Charleston’s harbor is a national monument because the Civil War started there when Fort Sumter was attacked by the Confederate Army. It’s a magnificent and charming city with the great historical value, one of the first settlements in America. On the way back to Myrtle Beach we stopped by the famous Angel Oak Tree. It’s almost 400 years old. The Angel Oak stretched its powerful branches over the ground and standing there like an old guardian of the land.

The summer was almost over and it’s time to travel again. I had a very fun time in Myrtle Beach. I met many new friends, went to many cool places such as Ripley’s aquarium and museum, a Mirror Maze. We went golfing, clubbing with my friends, and went on a helicopter ride. It was amazing!

My friend Logan and I choose places we wanted to visit, booked tickets and went forward to new adventures. Our first stop was Buffalo, New York where we went to Niagara Falls. The Famous boat “Made of the Mist” took us to the bottom of Horseshoe Falls. Then we went to the Cave of the Winds where we were surrounded by the water pounding down from nearly two hundred foot above. Also we crossed the border between the USA and Canada on the Rainbow Bridge. The water in the Niagara River was turquoise blue and cute rainbows made the scenery totally inspiring. Our next destination was Disney World in Orlando. The flight was very easy and fast. As soon as I woke up I found myself in the place of my childhood dreams. Disney World has everything. It is a little magic world. I saw all my favorite characters and went on many exciting rides. I got to participate in Indiana John’s stage show. Explosions, fights, special effects were going around me.

After Disney we went on our road trip across the country from Myrtle Beach to the Grand Canyon. We made a quick stop at the music city Nashville, Tennessee and then we went to Memphis to see Elvis Presley’s house. In Memphis we tried real southern barbeque, which was finger licking good.

Everything was going great until our car broke down from the crazy heat in Santa Rosa, New Mexico on the historic Route 66. But we didn’t give up though. We made it to Albuquerque, New Mexico rented a car and continued moving towards the Grand Canyon.

We arrived there at night where a big elk was the first to greet us there. We found our campground and went to see Grand Canyon at night. It was very scary to be in the dark, so quiet except for some eerie echoes all around us caused by the canyon walls. When morning came we packed up our camping gear and went to explore this gorgeous place. To say the Grand Canyon is big would be an understatement. You can’t grasp the size of the canyon until seeing it in person. When we got on the trail the marvelous landscape amazed us so much that it took our breath away. Each step brought us deeper into the earth. Then we came to a blockade on the trial. Apparently there was a mule stuck near the canyon rim and the park rangers weren’t letting anyone closer. Then from up above comes a helicopter to the rescue or so we thought. The helicopter lowered a harness down to the mule and off the scared little fella went. Logan and I were laughing about how scared the poor mule must be soaring through the air. Then the park ranger tells us that it was put to sleep. We felt very bad for little mule but there was no way to help it.

Then we went to small beautiful town Sheridan in picturesque Wyoming where Logan is from. I worked there last summer and decided to visit my friends. It was nice to visit Sheridan again, see its scenic countryside and to be in the Wild West. We went with my friends to the Big Horn Mountains to see beautiful Porcupine falls. We did a lot of stuff, I was very happy to meet everybody. But unfortunately it was September now and that meant it was time for me to go back to Ukraine. I had mixed emotions because I had such a great time. It was like a new little life for me. Every day was cool and full of events.

We conquered America from the Rocky Mountains to the Atlantic coastline nothing could stop us from achieving our goals. Every obstacle that we encountered while challenging was not impossible and I have grown as an individual. I gained so much life experience while exploring this great country and have so many memories to last a lifetime. Thank you so much CHI for this opportunity I truly had the best time in my life this past summer. 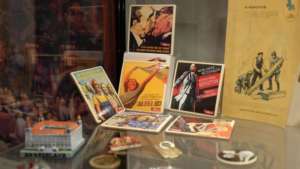