Despite a rainy summer on the East Coast, skies were clear and the temperature was just right on August 5, 2009 at Citizens Bank Park in Philadelphia when the Philadelphia Phillies swept the Colorado Rockies 7 – 0.

35 Work and Travel participants from two separate CHI territories were 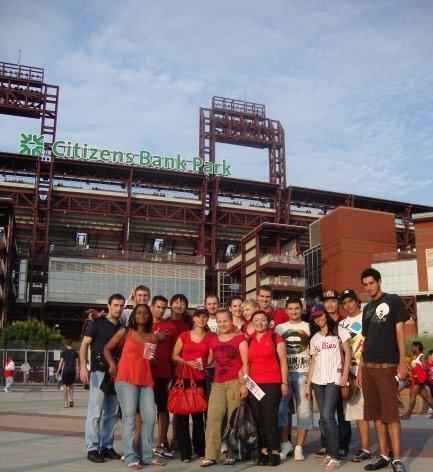 among the sell-out crowd of over 45,000 fans at the ballpark. Students came from ARAMARK at the Philadelphia Zoo as well as Funplex Mt. Laurel, an indoor/outdoor amusement park in New Jersey. One manager from each job also attended, along with CHI’s East Coast Coordinator Niki Woodall. Countries represented at the game include Bosnia, Serbia, Croatia, Russia, China, Ukraine and Colombia.

“I like to plan fun things for the students to do outside of work. Since I work in both the New Jersey and Pennsylvania territories, this was a great opportunity to bring students from different jobs together to meet each other. It also allowed us to thank our loyal employers who are so supportive of Work & Travel,” says Coordinator Niki Woodall. “You have to go to a baseball game at least once in America. What better team to watch than the World Champion Phillies!” the Philadelphia local says with pride.

Students met on the corner of Broad and Walnut Streets in Philadelphia to take the subway to the ballpark like typical Phillies fans. When asked how they enjoyed the game, Mate Lukac from Croatia said, “Well, even though none of us understood the rules of baseball, it was a lot of fun. We even â€˜tailgated’ in the parking lot beforehand with American fans.”

“It was great to see the students enjoy themselves. They work very hard for us at ARAMARK; they definitely deserved a fun night out,” says H.R. Manager Ashley Smith from ARAMARK at the Zoo. 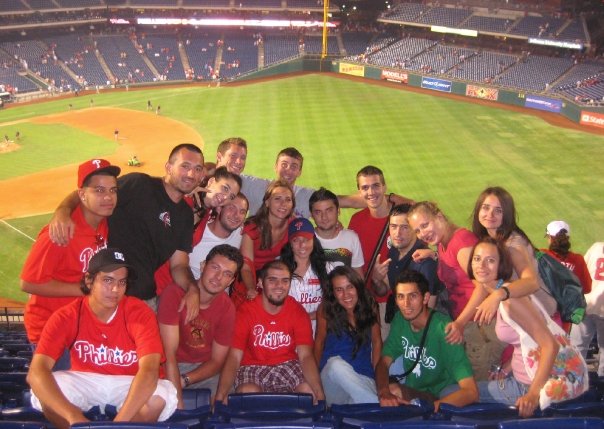 to escape the suburbs of New Jersey and head to the city whenever possible. “It was great getting to meet the Philly students. We are now friends on Facebook and I’m planning to visit them in Philly soon,” says Lucia.

Other trips the students plan to attend with Woodall include Dorney Park, Six Flags Great Adventure, night club parties in Philly and New York City, and a trip to the Jersey Shore.